I went out about a week ago to hike with my friend, Mike, to a site out near the Salton Sea that was once a place the Cahuilla Indians used to hang out a bit.  There is still lots of evidence of their being there including pottery sherds, petroglyphs, bedrock mortals and stone walls of sleeping circles.  For anyone interested in the history of the local Indians, it's an amazing spot. 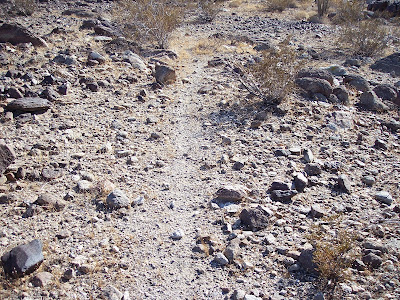 There's a trail that leads to this site but it's in the middle of nowhere.  I have no idea how I actually found it and if I tried to explain to you how to get there I'd have to make sure Search and Rescue is ready for when you get lost. 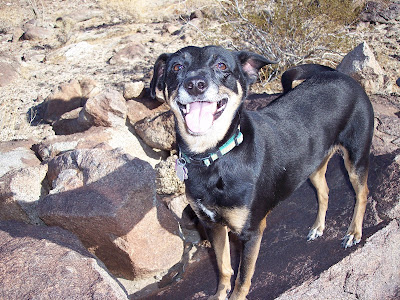 Of course, if I got lost I'd have my trusty hound, Kahlua, there to help me find the way back. 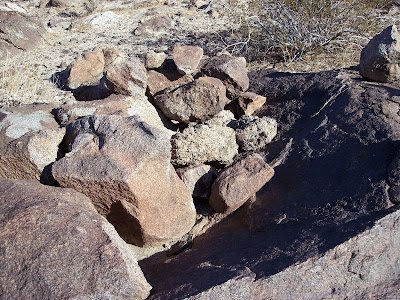 You follow the trail past these rocks and a few other subtle markers until you get to the site of what was once a village, albeit a small one. 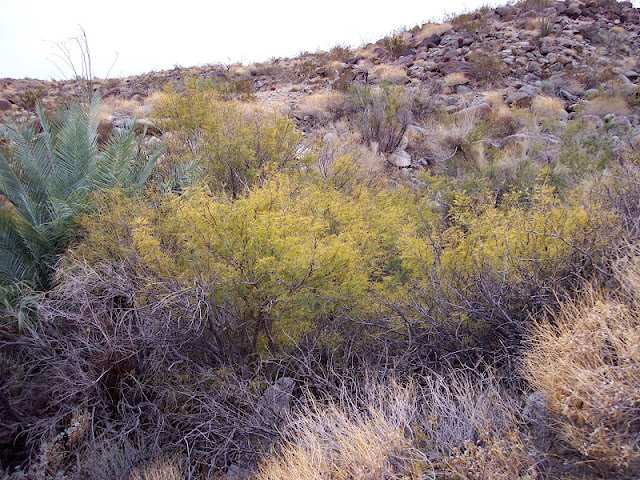 Why this place is a question that anyone would ask when coming here and the reason is simple.  Food and water.  With mesquite bushes all around there was plenty of food and a non-native date palm testifies to water just below the surface.  It's unbelievable that out in this seemingly barren wasteland that people could not only survive but thrive.  Most of us would last a few days before giving up and heading to the supermarket.  The Cahuilla lived out here for generations.  It never ceases to amaze me. 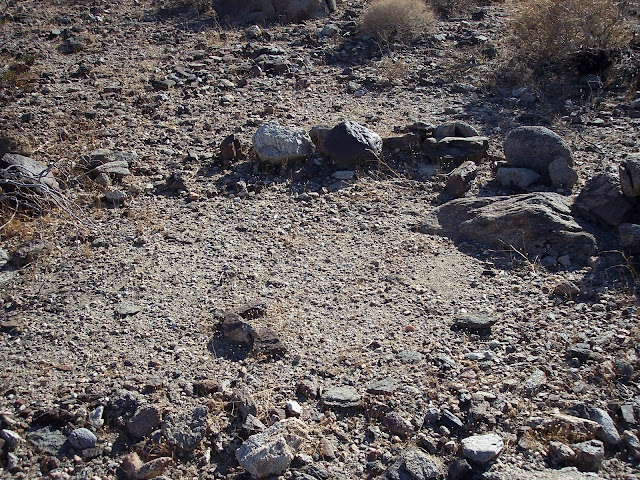 On the banks of the wash there are some cleared out areas that were once sleeping circles. 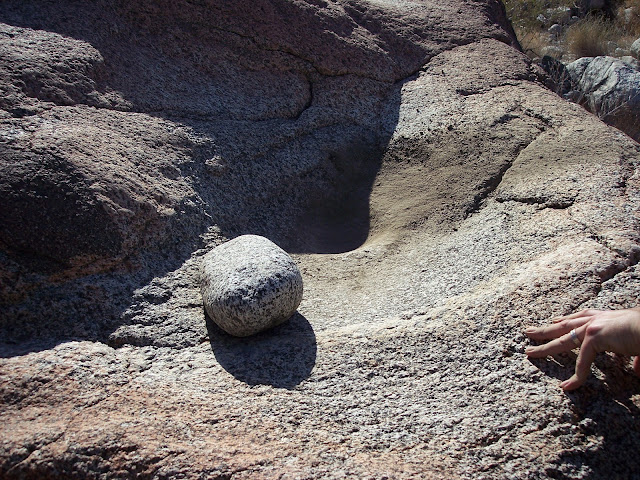 The area is strewn with mortars where the Indian women ground the mesquite pods for food. 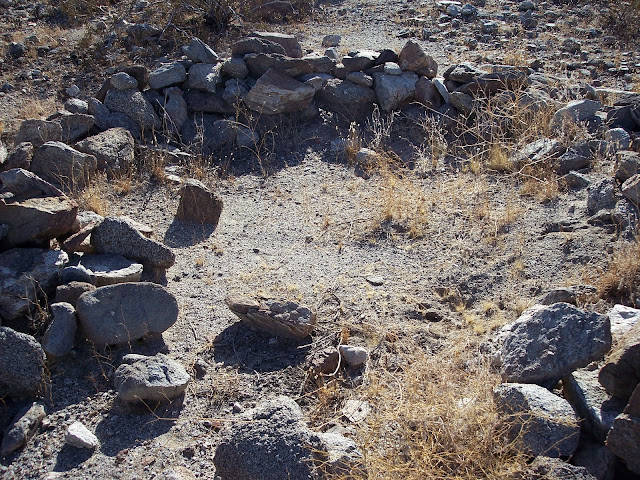 And despite the fact that no one lived here in over one hundred years, walls remain where families slept night after night and kids played.  There were once walls made from branches and foliage but now only the rocks are here.  And here they'll stay. 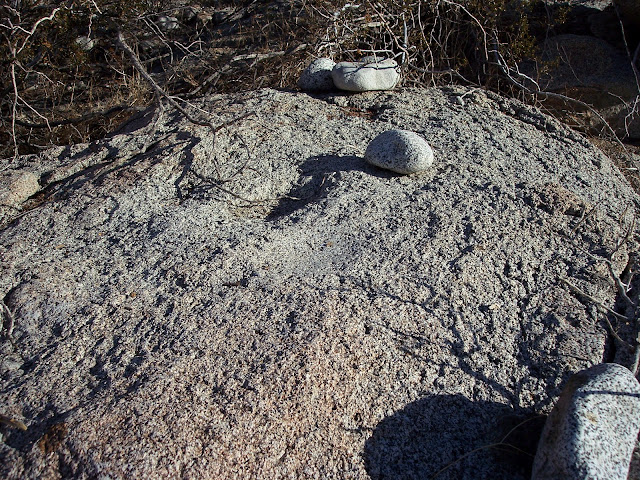 There is a profusion of mortars all along the wash so you know that people lived here for quite some time. 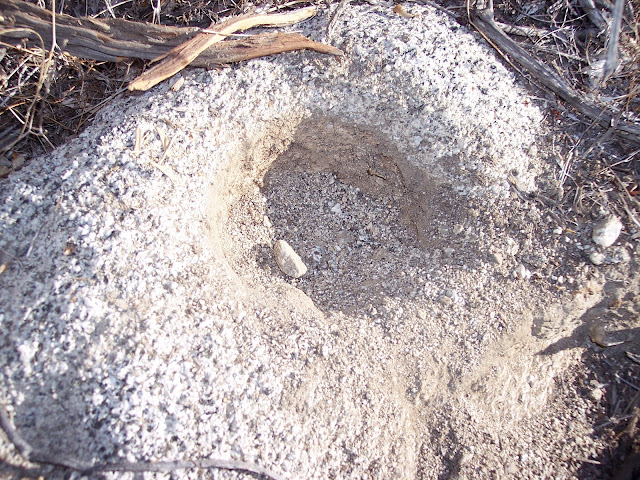 I spot what looks like a mortar that's become filled with sand and decide to check it out. 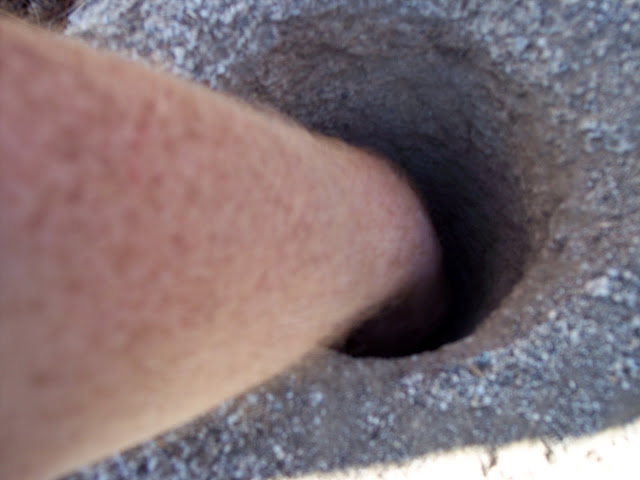 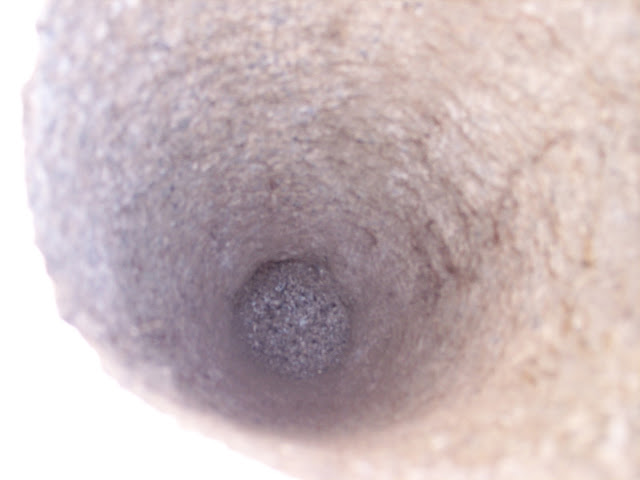 And it took some time to get to the bottom because this mortar was well over a foot deep.  That took a long time to make.  A long time. 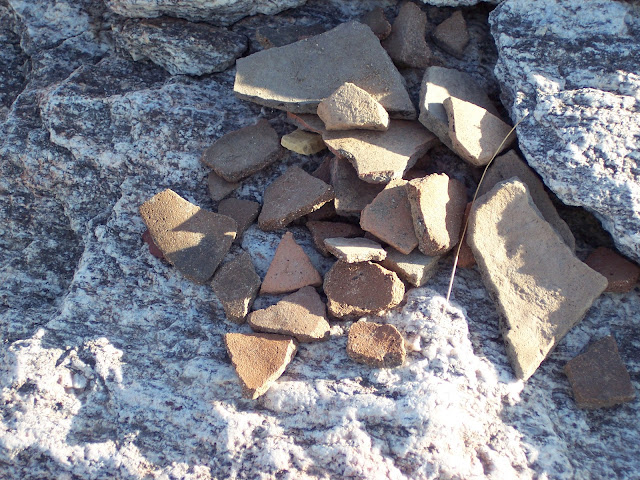 Another testament to how long people lived here is the profusion of pottery sherds in the area.  It seems like you can't hardly take a step with spotting some.  They were everywhere. 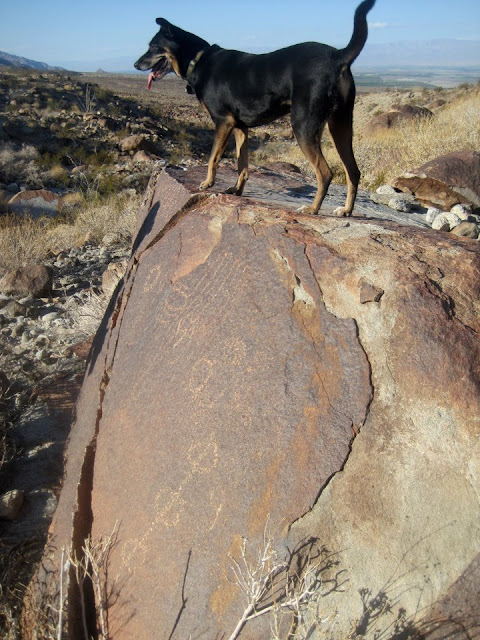 Mike took this picture of Kahlua checking out the petroglyphs in the area, too. 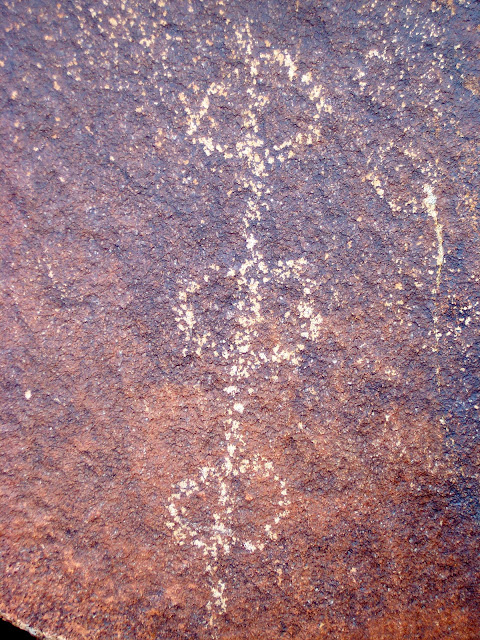 There are some really interesting panels out here. 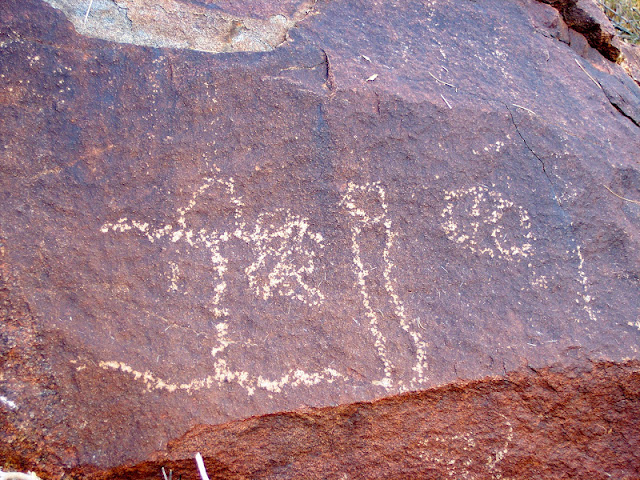 Including this one of what appears to be one of the earliest basketball games ever recorded. 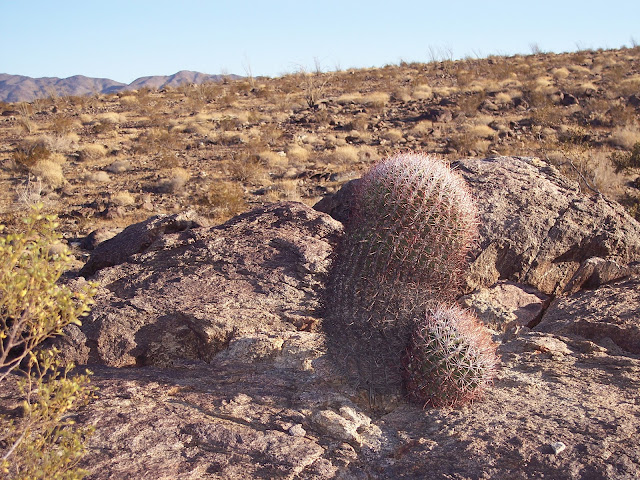 I love the rugged beauty of the desert, where life grows right out of the rocks. 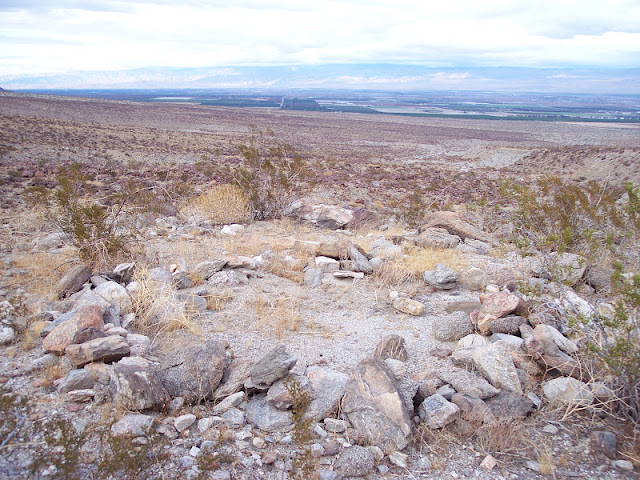 And I'm awed by the fact that magical places like this still exist and are seldom ever seen, even though they're right here in plain sight.  It's why I never get tired of  exploring.
Posted by Hal Summers at 5:48 PM

Hal Summers
In 2009, I hiked every single day. In 2010, I got lazy and out of shape. In 2011, it's back to hiking...just not every day. Most people in a similar situation would probably buy some newfangled piece of exercise equipment they saw on late night television or start going to the gym. Not me. I don't have room for any more junk in my house and the gym has to be one of the most boring places on the face of the earth. But I do love hiking and it's my hope the physical challenge of that coupled with a better diet will help me get in the shape I want to be in and stay there. But we'll see.